The rhythms and instruments of Brazil have a rich variety of sounds and patterns. Samba (centered in Rio de Janeiro) is the predominant rhythmic style with variations such as Samba Reggae emerging in Bahia, Brazil.  There are lots of ties to African heritage as many slaves brought musical influences with them.  These traditions fused with Portuguese and native South American influences to create the unique groove in Brazilian percussion music.  Here are some of the main instruments you should know! 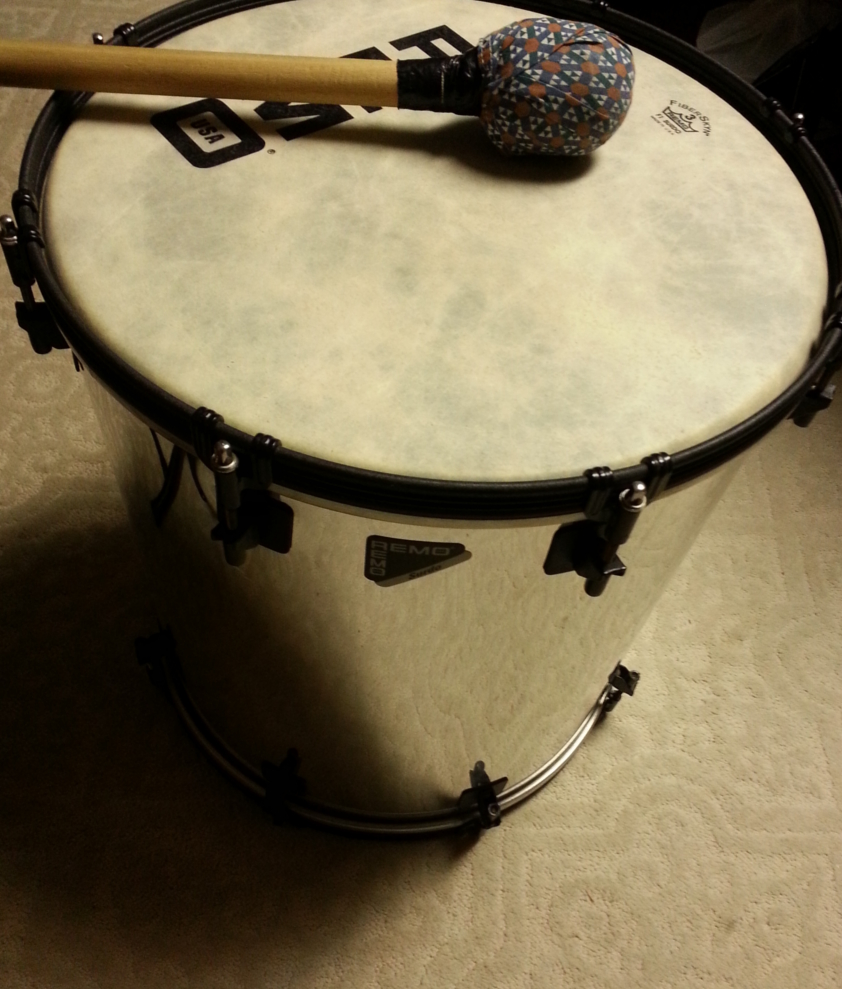 The surdo is the bass drum in the Brazilian Bateria (the drum and percussion ensemble).  Depending on the size of the ensemble, there can be up to 3 separate and interwoven surdo parts.  When played with one stick (large mallet), the off-hand muffles the head and keeps soft touched counter rhythms against the stick part; this is predominant in the Escola de Samba (Samba School) ensembles in Rio.  In Salvador, Bahia, the Blocos Afro groups use two mallets and play more note within the groove of Samba Reggae. 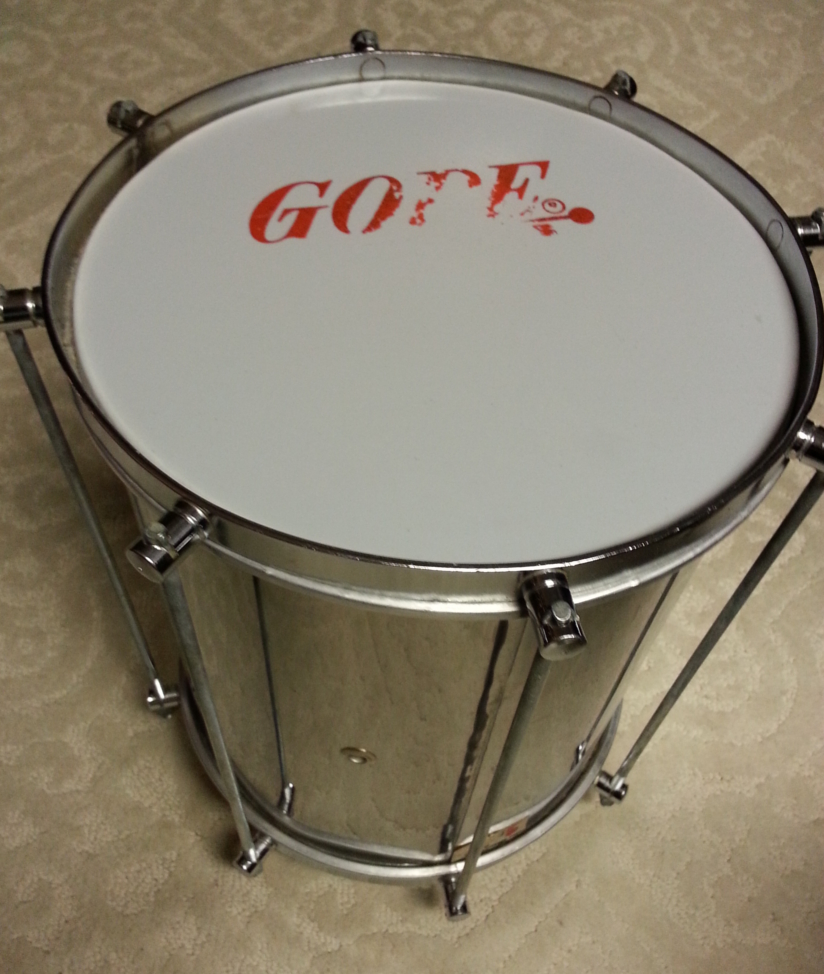 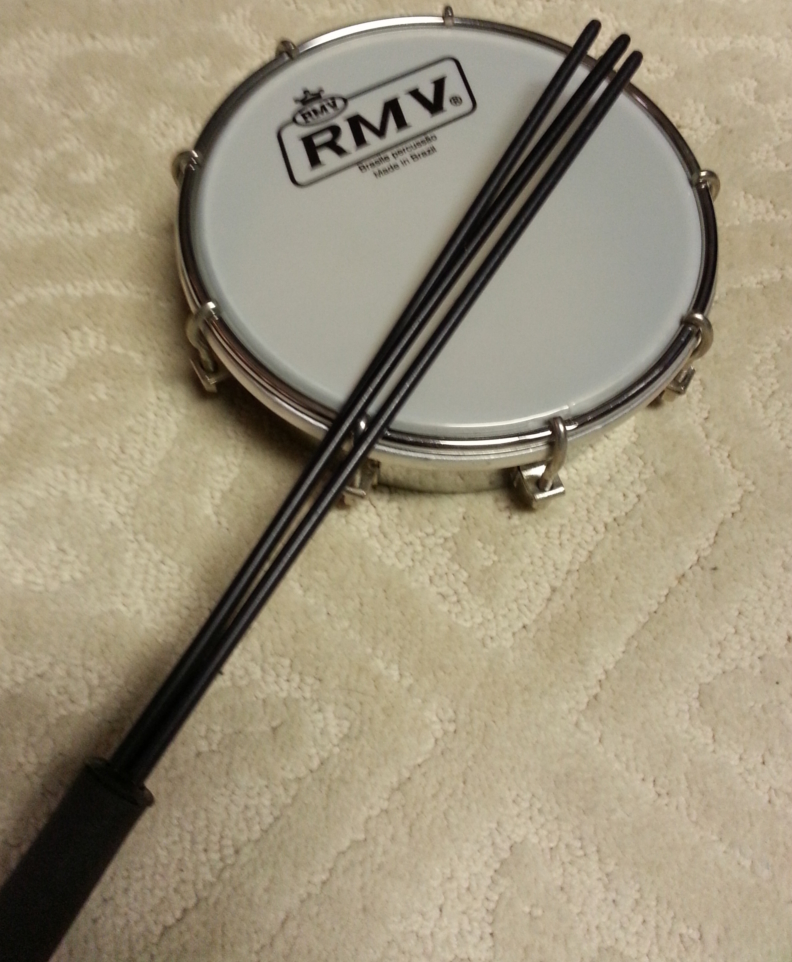 The Tamborim is a small high pitched single-headed drum played with a single stick. The player also uses the free fingers of the hand holding the drum to muffle the drum skin for alternate notes.  The bateria of Escolas use a special plastic stick called a baqueta de tamborim. It has 3 or more thin sticks bundled together to give a flammed effect. The flexible stick is used to execute the "flip" technique where the player adds extra strokes on the backstroke to play a contniuous stream of notes. 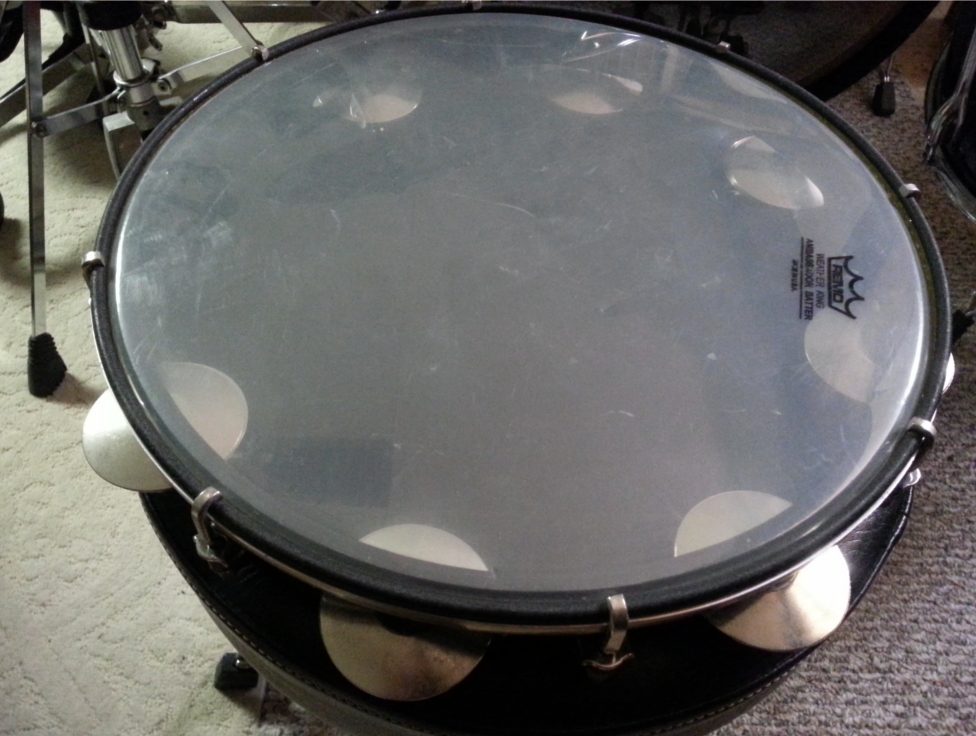 The Pandeiro is similar to a tamborine, with a drum skin and jingle/cymbals mounted within the circular frame. The Pandeiro, however, has a set of 3 jingle/cymbals that close inward to create a very dry quickly decaying note. This allows the player to play very crisp rhythmic patterns using an intricate hand technique with several tones. It can be used in a small ensemble to imply the composite rhythm of the entire bateria.  Within the bateria, it adds a continuous stream of notes that helps glue together the unique pulse of Brazilian Samba. 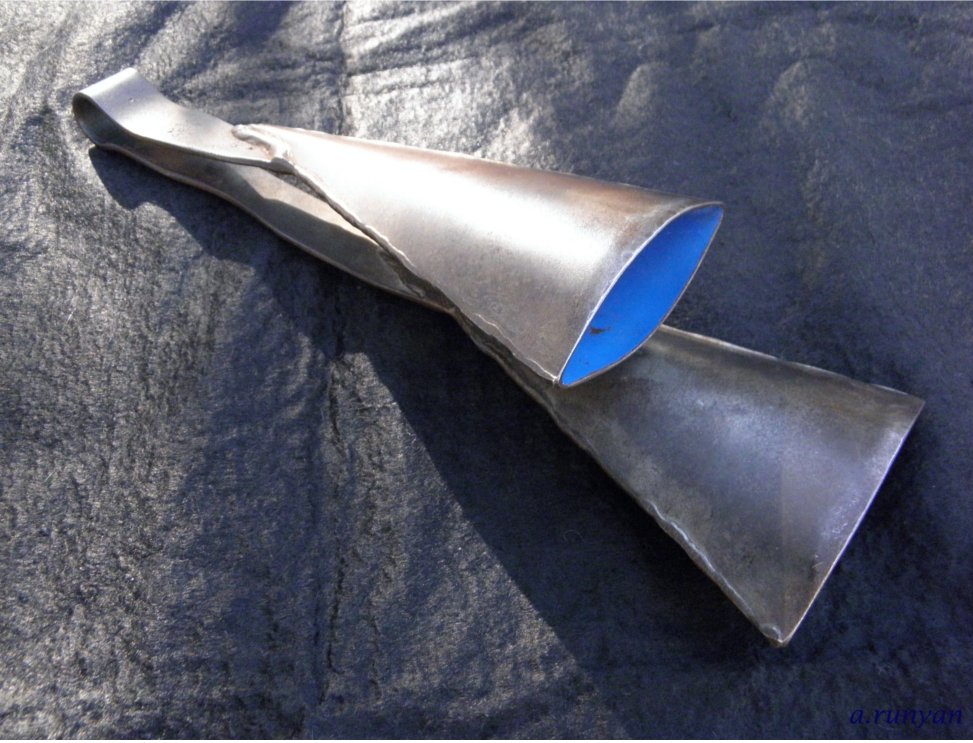 The Agogo Bell is a double bell. It uses a high and lower pitched pair of notes to create patterns.  Some agogo bells are made with a flexible connecting rod that allows the player to click the double bells together to play a third note.  This bell has strong ties to the Yoruban Agogo Bell.  It has changed over the generations in Brazil to become brighter sounding with the bells being now welded together for vertical stacking.

The Chocalho is a frame of stacked jingles that is shaken front to back by the player to define the underlying pulse of the Samba groove.

The Ganza is a small metalic cylinder shaker filled with a fine sand/pebble mixture.  It is also shaken front to back to outline the pulse of Samba. 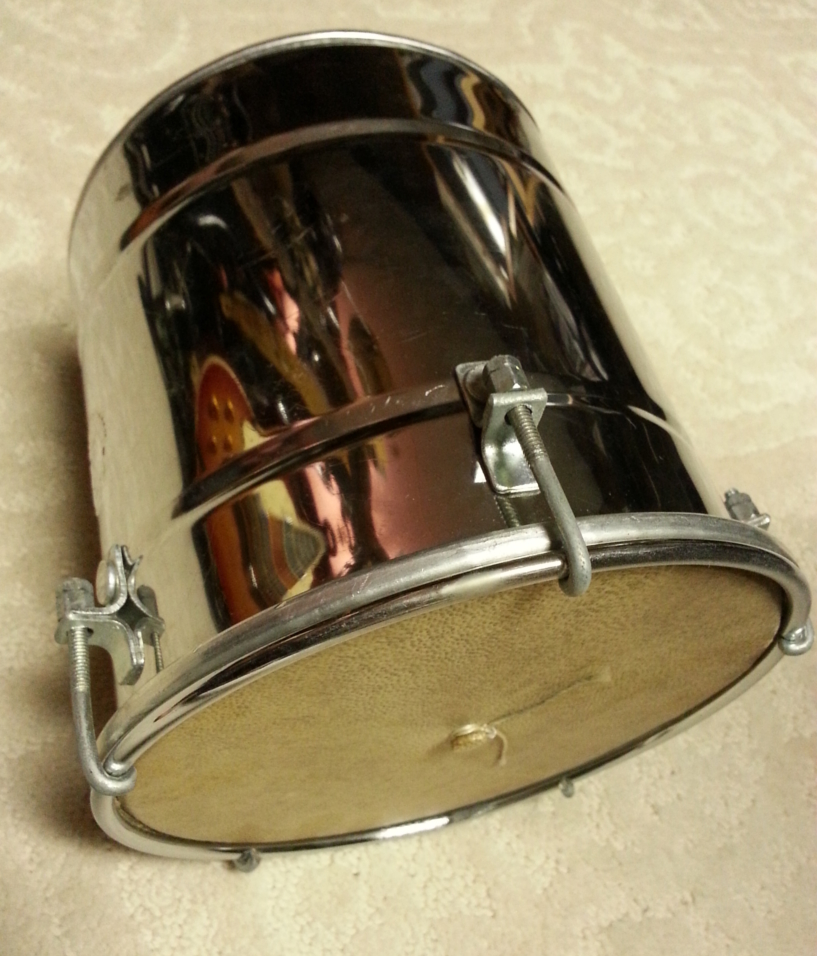 The Cuica is a friction drum.  It has a single drum head with a rattan stick attached to the inside of the drum skin.  The player slides a damp cloth up and down the stick to create tones that sound like yelps or squeeks.  The sound is further shaped by placing pressure on the drumskin to, in effect, change the pitch of the note.

The Apito is a 3 pitched whistle that is used to signal cues to the Bateria. Apito means "whistle" in Portuguese. The Mestre de Bateria (the leader of the Bateria) leads the ensemble through transitions as well as creating rhythmic embellishments with the high pitched notes of the Apito.

The Reco Reco is a scraped instrument made of springs and a metal mounting plate.  The player scrapes a metal stick  back and forth across the springs to create rhythmic phrases. 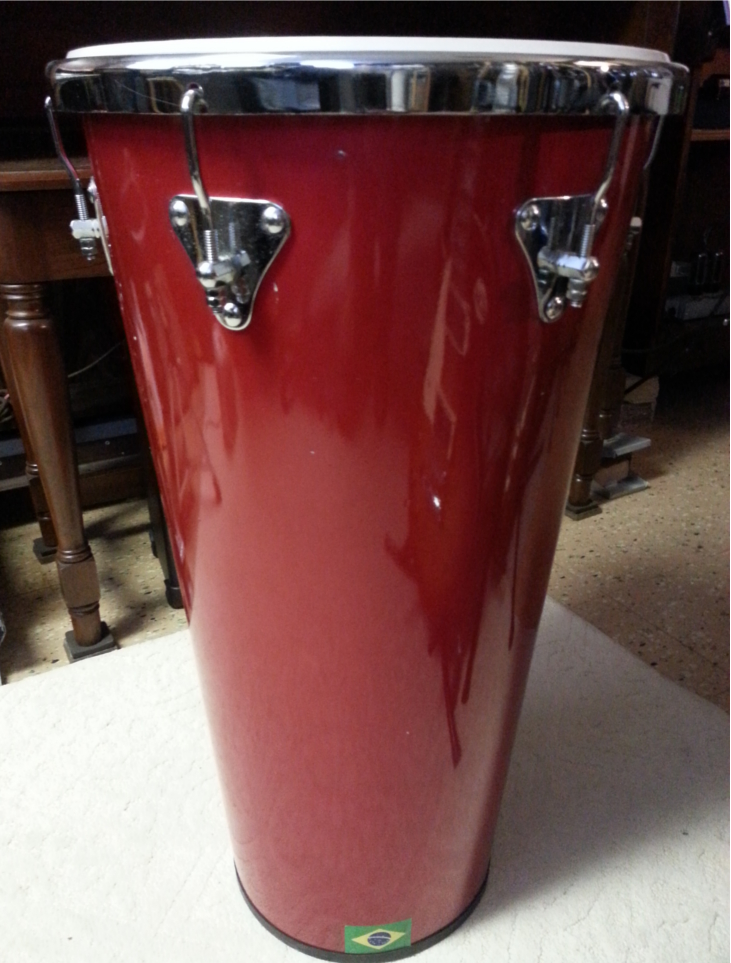 The Timbau (also known as Timbal) is a slightly cone shaped hand drum that is played mostly in Bahia.  It is fairly light weight and has a synthetic tunable drum head.  It is played by the Blocos Afro groups such as Timbalada and Olodum in Samba Reggae and Axe styles of music.  The hand drum techniques are similar to those used for djembe, conga and traditional Afro-Brazilian drumming on the Atabaque drums.

The Bacurinha is a smaller sized Repinique played predominently in Bahia by the Blocos Afro group Timbalada.  It uses a similar technique as the Repinique, but with a higher pitched cutting tone. 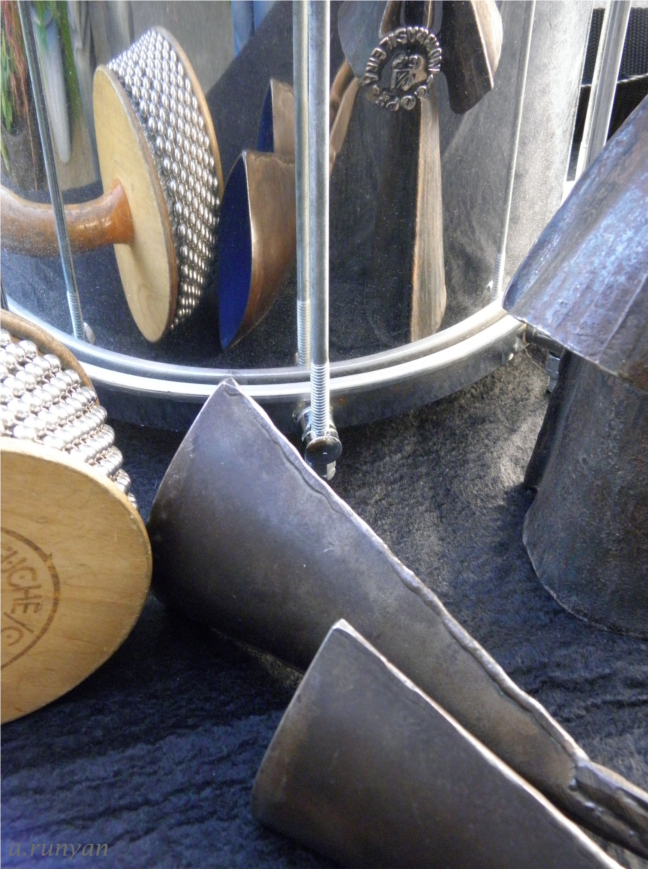 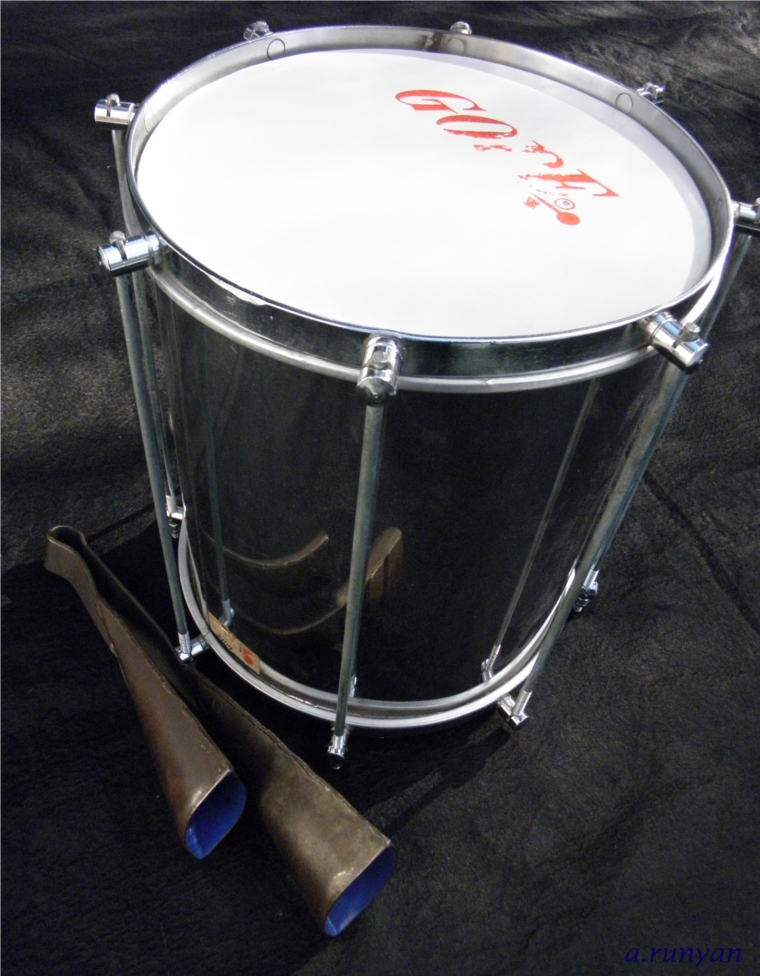