If you are inspired by deep grooves that draw from some of the richest pockets of rhythm in the world, look no further. Avo Randruut uses his percussive tools as an architect of sonic rhythm fabrics that build springboards for new musical directions.

As a multi-instrumentalist (drums, ethnic percussion, piano, Hammond B3, guitar, bass, vocals) Avo works as both an artist and producer, using his own studio, AquaSonic, as his base of operations. His philosophy leans toward gritty, rootsy sounds that groove hard and contain lots of rich subtle textures. These are the sounds that stand the test of time musically. As a producer, Avo creates innovative arrangements that showcase the strengths of both the performer and the song itself.

Q: Where did you grow up?

A: I was born in Chicago and grew up in and around the area. I am a first generation American as my parents both came from Estonia.﻿

Q: What made you realize that music was your path?

A: I first realized it when I heard all this great music on the radio as a kid. I was inspired to start learning piano. In those days, I was buying vinyl records and I remember the great feeling of going to buy some of my favorite stuff on 45's and LP formats. Listening to the music really took me to another place in myself and I wanted more of that. As a kid, my friends and I used to create our own fictional radio shows on a little tape machine of mine, including our own songs, commercials and comedy routines. We had a blast listening back to ourselves.

Q: How would you describe the music that you typically create?

A: My music usually has some kind of deep rhythmic groove at its basis and that inspires melodies, chords and lyrics for me. I may start with an African or Latin rhythm, or any other interesting rhythm part and build from there. Also, the actual particular tone of an instrument can be a real hook for me as well. I pay special attention to every detail of an instrument's sound because that can often suggest a whole direction in a piece. My music is often a new blend of styles that may not have been done before. Rich groove + gritty tones and textures + soulful melodies + killer breaks and riffs= my music.

Q: Who are your biggest musical influences?

A: Some of my biggest influences are actually producers. Daniel Lanois, T-Bone Burnett, George Martin, Gabriel Roth (Daptone Records) and Dan Auerbach are some of my favorite artist/producers. Notice they all play as well as produce. For me, the whole soundscape has to be set up with a big vision for the song to work. Other influences include: Jimmy Page for his incredible riffs and compositions, John Bonham for his groove, Lowell George for his vocals, guitar and songwriting with Little Feat (esp. "Waiting for Columbus"), the Beatles definitely are huge for me in all aspects, Elton John's early work, and Carlinhos Brown has done some great stuff out of Brazil. Jimi Hendrix, the Police and Talking Heads (esp. "Remain in Light" w/ Brian Eno) also rank high. I love: the Robert Plant/Alison Krauss "Raising Sand" recording, the Ray Lamontagne "God Willin' and the Creek Don't Rise" (Jay Bellerose plays drums on both and sounds great), and the Arctic Monkey's "AM". Daniel Lanois' "Black Dub" sounds great with Brian Blade on drums. I also really respect Buddy Miller's work out of Nashville. Fela, Bob Marley, King Sunny Ade, James Brown (the subject of my Master's Thesis), Parliament/Funkadelic, Sly Stone, Santana, the Neville Brothers and the Meters were all huge influences on me as well. I also have to acknowledge the insights I've gained from studying and playing traditional African, Brazilian and Latin percussion as big influences. My big percussion influences in those areas are: Airto, Mamady Keita, Famoudou Konate, Michael Spiro, Changuito and Giovanni Hidalgo.

Q: What makes your music unique?

A: My music is really informed by a variety of styles and traditions, giving me a large foundation to draw from. I try to create a new blend of ideas that really point out genuine connections between various styles and make the song come to life. I think the grooves in my music have a very unique feel to them as well. I really try to sculpt the sound of the individual parts to enhance the whole, both in rhythm and texture.

Q: Has there been one particular moment in your musical career that you're most proud of?

A: I was really proud to play with Yo-Yo Ma and the Silk Road Ensemble in front of 10,000+ people in downtown Chicago at Millenium Park recently. He's a great collaborator and really raises the level of musicianship of everyone around him. We also had the inclusion of the Chicago Symphony Orchestra and about 400 students from the Chicago schools that we trained in some additional musical parts participating in the massive production.

A: I am finishing a solo album and also working with new artists as a producer. One of my projects was with Sammie Torres & Rick Castanedo titled "Passing Through Pilsen". I produced and played on it quite a bit, contributed songs, and it was recorded and mixed by me at my studio, AquaSonic. I'm also writing and recording lots of music for film and TV through TAXI music. 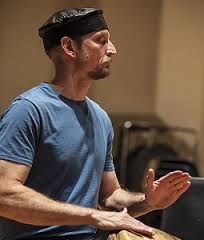 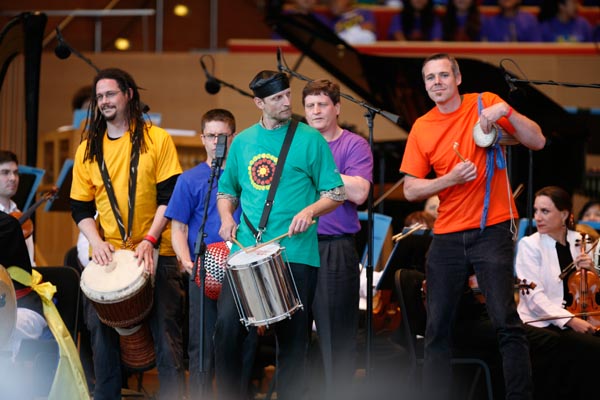